Lycra, Loved by women for its ability to magically smooth and shape the unshape-able has taken over the lives of middle aged amateur athletes. So much so that MAMIL (Middle-Aged Man {and women} in Lycra) has been added to the Oxford Dictionary’s online database. The MAMIL is a relatively new phenomenon, first appearing around the time of the cycle to work scheme in 2009. 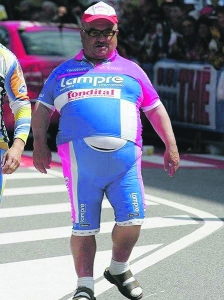 The Department of Transport aimed to increase cycling from 2% of journeys in 2009 to 10% by 2020 by offering tax-free loans to purchase bicycles and equipment, improved infrastructure, promotional events, a shared bike scheme and publication of the first design standards for cycling in Ireland (Stewart et al., 2015). And the MAMILs bought in, buying the bikes and all the brightest lycra, because it is possible to lower the wind resistance significantly by wearing tighter, lighter clothing and trimming the body hair. Small aerodynamic drag reduction can result in a significant performance increase apparently, and even on short one mile trips! (Kyle & Caiozzo, 1986; Haake, 2009; Oggiano et al., 2013) Despite their commitment to exercise and devotion to reducing drag by donning spandex, these creatures had a bit of a belly – the MAMIL-camel as it is sometimes called. But not anymore the species has evolved and they want to win races ……. but at what cost?? Would they cheat to win?

Lance Armstrong could too be blamed for the birth of the MAMIL. Hypocritically, the instigator of the most sophisticated doping programme cycling has ever seen revealed he would be heartbroken if he ever cheated at golf. The disgraced American cyclist is a keen amateur golfer with a handicap of 10. His doping in professional cycling led to him being stripped of his seven Tour de France titles. But the notion of taking liberties on the golf course appals Armstrong to his very core. So is it acceptable to cheat in a professional sport but not in amateur competition? Only professional athletes use performance enhancing drugs, they are the only people with anything to gain? We criticize them and blame our growing cynicism with success in sport on professional athletes propensity to use performance enhancing drugs.

However amateur athletes including MAMILs dope too. Researchers in Germany discovered that 15% of three thousand triathletes (amateurs) surveyed admitted to brain doping – using prescription medicines that increase attention concentration, memory, cognition and overall mental performance. Taking drug products including amphetamines, or medicines like modafinil or methylphenidate to enhance the brain is more fashionable among amateur athletes than taking drugs to boost power, strength and endurance. In the same study 13% said they had taken drugs like EPO (erythropoietin, a substance that boosts red blood cells’ oxygen-carrying capacity), steroids, or growth hormones (HGH). These drugs not only have a reputation for improving athletic performance but also have potentially dangerous side effects. Significantly more men than women admitted to both types of doping. (Dietz et al., 2013)

So some MAMILs and weekend warriors are winning cycling races, but potential winning them having doped, having trained as hard as professionals. It has also resulted in the incredible situation of professional cyclists explaining that “they no longer ride in Gran Fondos” – popular, lengthy timed cycling events run mainly in Italy – because they are so competitive due to the number of  amateur riders doping. But cycling is not the only sport affected by amateur doping. It is widespread throughout all supposed leisure activities (Striegel et al., 2006) Anti-doping agencies have expressed concerns that doping cheats are escaping detection in amateur sport because limited funds have concentrated efforts at the elite level. Performance enhancing drugs are cheap and accessible. The sales of performance enhancing drugs are growing all over the world because it allows amateurs mimic the performances and physiques of their professional idols.

As an evolving MAMIL I want to run faster and beat my fellow MAMILs. Athletes, both professional and amateur, will always have the desire to push the edge whether that is for money, recognition or both.  They must decide whether they are to compete honestly and safely but at a possible disadvantage. But anyone that has trained for a goal knows it is a test in the ability to persist and postpone the short-term satisfaction of stopping, in favour of achieving. In today’s fast paced world instant gratification is the norm. Running teaches the value of patience and hard work, and sometimes the real reward is the journey rather than winning at all costs.