Bonking…….. We’ve all bonked. Sometimes I’m alone when I bonk, occasionally I’m in a group.  It’s vital to find a rhythm and maintain it.  A conservative start works best; it allows the body to warm up. The capacity to hold it at threshold without over reaching is vital for a good performance but blinded by the lust for speed many tend to go out too fast only to blow up prematurely during the marathon. It can ruin the marathon plan and the target time for the marathon disintegrates before even reaching half way. Any endurance athletes who have done long distances have at some point “bonked” or hit the wall.  “Bonking” describes the point at which the body’s glycogen (carbohydrate) stores are dwindling and the body starts to fatigue, making each step towards the finish line a vicious battle of mind over body. It’s painful ……. so painful – legs feel heavy, body weary, and the mind exhausted “Just stop ….stop ….. It’ll be grand just stop. Why am I doing this to myself?? 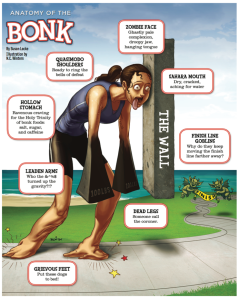 The best way to avoid bonking is choosing the right goal time. For the purposes of training, a target marathon finishing time should be based on the physiological realities of fitness rather than unrealistic aspirations……… easier said than done. As almost all marathon training plans are based on a goal time, setting a time target that is too ambitious is the most common reason runners race poorly, and more importantly it is one of the main reasons runners get injured during training.  But what is a good marathon time? The world’s average finish time of a marathon was 4 hours 21 minutes and 21 seconds in 2014 (for non elite athletes). For men it was 4:13:23 and for women 4:42:33 (29:10 minutes slower).  In 2014, Iceland was the fastest marathon running nation in the world. Second on the list was Portugal (3:59:04) and third Luxembourg (4:00:46), Ireland were 27th fastest nation with an average of 4:17:06.

There are a number of methods to establish a target time for a marathon. Previous personal best times in the 10 km, half marathon and marathon can be used to extrapolate an approximate time target for the marathon (Salinero et al., 2016) and therefore allow you to set a realistic aim. Marathon performance is influenced by a variety of anthropometric (body type) and training factors. Body fat percentage, circumferences and length of limbs, body weight, body height and body mass index (BMI) have an influence on running performance. The training volume and running speed during training also affect running performance. Body fat and running speed during training are usually the most important influencing factors in predicting the marathon finishing time of runners.  Unfortunately the strong correlation between running speed and the body mass index (BMI) has long been established (Sedeaud et al., 2014). Body mass index (BMI) is calculated as body mass divided by the square of the body height. A BMI of 25 or greater is considered overweight, and a BMI higher than 30 is considered obese. It must however be noted that BMI does not account for body composition (percentage of fat versus muscle) which is a much better indicator of fitness and fatness. So in order to become a quicker runner, it is necessary to be lighter.  Body weight affects performance in running more than any other sport, and lower BMI seems increasingly important as race distances get longer (Knechtle et al., 2010).

So a realistic goal time based on your physiological fitness allows the establishment of a training plan which is focused on gradual improvement and injury avoidance. In order to resist the “BONK” – this urge to give up and slow down when feeling miserable – the limits of suffering tolerance most be broken in training. Suffering is something you have to practice if you want to run longer, farther or faster because improvement lies at the blurred margins of pain and agony.  This is as true for the runner attempting to complete their first couch to 5km as it is for those hoping to compete in the Olympics. ……… But personal bests are broken when people push the edges of their ability; disregarding their perceived physiological limits. The internal struggle fought between running and mental suffering ultimately leads to redemption and liberation through achievement.